I'm proud to announce that my second novel, The Iterations of Caroline, has been released by Shuniah House Books! 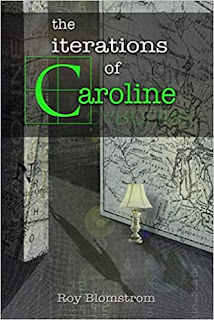 This novel has been a long time in the making--even before the pandemic showed up, I'd been working on it for many years.

You know, the small things.

As the back cover says, "The Iterations of Caroline is the story of a woman growing into her power, the man who loves her, and the evil that pursues them both."

There are also lupines, discussions over coffee, the Spanish flu, Terry Fox, and Route 66.

Here's more from the back cover:

On a summer afternoon, David Williamson almost--but doesn't--run into a miror version of himself in his upstairs bedroom. Downstairs, he finds that his world has changed, and so has he, in subtle and not-so-subtle ways.

From a former student and a network of physicist friends, Caroline and David learn that they're traveling through the multiverse--multiple versions of the universe. And ominously, Rey seems to be in charge of their trip.

I'm happy that this book is making its way into the world. My publisher assures me that discussion questions and a Q&A are coming soon to the publisher's website: shuniahhousebooks.com.

And if you have a moment, my publisher would also appreciate it if you left a review at Indigo or Amazon. That not only lets us know your opinion, it also helps others who might enjoy reading it find the book.