The Boy on the Cover: Onni Kokko 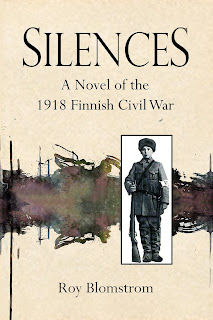 The cover for SILENCES: A NOVEL OF THE 1918 FINNISH CIVIL WAR was designed by Heather Dickson, aka H. Leighton Dickson, a Thunder Bay writer of science fiction and fantasy--and a fine designer.

Because the internet is a magical place, it's possible to find all kinds of photos of this time in history, which I drew on extensively in setting Jussi, Karl, and Ivor in various locations in Finland.

The image above is of Onni Kokko in his uniform as a soldier in the White Army. Just 14 when he was wounded in the battle of Tampere, he died in hospital. Before he died, Mannerheim granted him the 4th Class Cross of Liberty. He was the youngest to receive this award. A photo, available online, shows him lying on his deathbed, his head wrapped in bandages, with the award on the pillow beside his head.

Both Onni and Arvo informed the character of Ivor, who is barely fifteen when the fighting begins.

I was pleased--if that's the right word--that Heather suggested the photo of using Onni on the cover. I wanted readers to remember that this war tore apart families.
at December 22, 2017